Bambam made a tweet hailing her husband, Teddy A as a good man saying she married a good man and she celebrates him today telling him she will love him forever, which is very romantic of her and shows how much she’s in love.

Teddy A on the other hand replied to the tweet of Bambam gushing over her saying he married the best woman ever, telling her he loves her more and we guess it’s a love season for them as you could see based on their tweets.

Also Important!!  I Have Trust Issues, I Cry For No Reason – Adesuwa Etomi 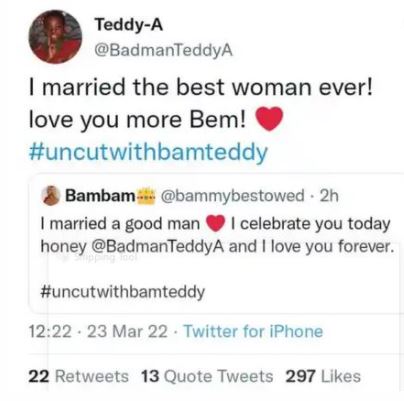 You Are A Liar, You Started Flirting With Me First – Tells Emmanuel

Don’t envy us, we earn peanuts in Nollywood – Gideon Okeke