This comes after Paul and Peter Okoye, popular singing twin brothers, performed together for the first time in five years following their feud, which resulted in the disbandment of their group, P-Square.

Sound Sultan died of throat cancer in July 2021, and his brother, Dare ‘Baba Dee,’ called on the Okoyes to settle their feud as a mark of respect for the late musician during his memorial service.

Also Important!!  Queen Elizabeth Was Told To Give Up Horseriding Almost Two Months Ago

Baba Dee had recalled that Sound Sultan had introduced him to P-Square as he pleaded with the brothers to reconcile.

Sound Sultan’s tribute event also resulted in the reunion of members of the now-defunct music trio Plantashun Boiz, as 2Baba, Black Face, and Faze were seen together for the first time since their break-out over a decade ago.

With P-Square’s reconciliation, ID Cabasa felt it was appropriate to notify Sound Sultan of the new development.

News of the brothers’ reconciliation went viral a few days ago, after Paul’s wife, Anita, posted a video on her Instagram page showing Peter spending quality time with his twin brother’s children while shopping in the United States.

Peter and Paul began following each other on Instagram again shortly after that.

After years of feuding that led to the breakup of their band, P-Square, they were seen in a viral video embracing on Wednesday.

The couple also celebrated their 40th birthdays together and charmed guests at their birthday bash by performing some of their greatest tunes. 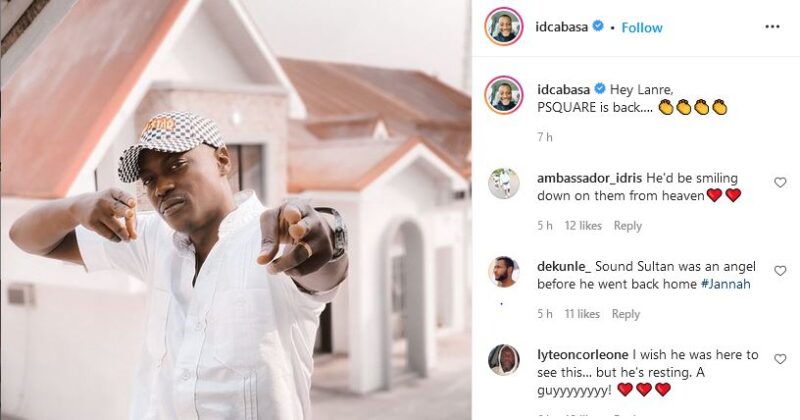 Top 20 Richest Musicians In Africa 2021 According To Forbes