The fan had taken to Instagram to appeal to the ace singer to give him a car to start bolt business.

Commenting under the YBNL boss’s post, the fan asked the rapper for some money to start a business.

Reacting to this, the rapper asked the fan if he had given him any money to keep for him. He concluded the post by making a remark which netizens perceive to be a jibe at the fan’s mum.

Wale Adebayo @RealWaleAde wrote;
” I kn you love Olamide. Trust me, | love him too wholeheartedly. But on this one, he’s wrong. | get it, he might not be in the mood, he’s human, but Olamide gat apologize to the young man. A spade is a spade. The dude did nothing wrong asking for help. Badoo, calm down apologize.”

iambasunma wrote:
“As yoruba will say person wey get mama for house no go abuse another person mama for outside…i don’t blame him saaa…i blame u all that praise them..celeb my foot..”

Daniel Regha wrote;
“Olamide, ur fan Oluwaseun only requested u assist him in purchasing a car so he can become a taxi driver & hustle for his daily bread; He didn’t impose. U are arguably rich, if u can help him kindly oblige but don’t make a mockery of him cos it takes guts for one to ask for help.” 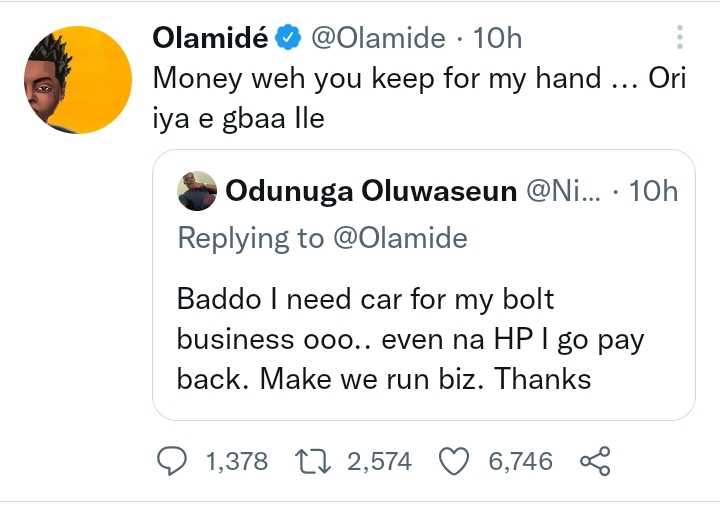 Fans Calls Out Nengi Over Romantic Affairs With Davido