The star revealed that in 2019, he pleaded with a music producer that he doesn’t have money and should hear him out but he got snubbed.

Ruger said the producer refused to work with him back then because he had no money and now the same producer is in his DM saying a funny thing.

The singer then asked how he should attend to him and he also went ahead to praise D’Prince for believing in him. 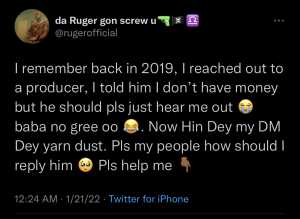 WhiteMoney kissed JMK, yet angry over my relationship with Cross – Queen fumes